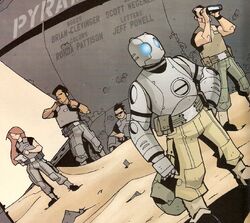 Atomic Robo assembled an elite team of Tesladyne scientists to investigate abnormal situations around the globe. Dubbed "Action Scientists" due to often being on the frontlines of hazardous situations, the team has become the go-to unit for dealing with strange and unusual circumstances.

Once housed in the Empire State Building, the team's headquarters was moved to a heavily modified Titan Missile Base on an island off the coast of New England in 2002.