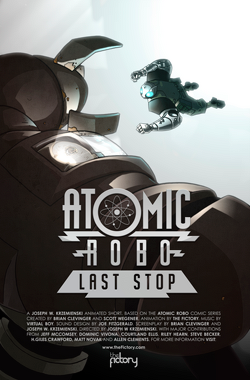 "Atomic Robo: Last Stop" is an animated short which has recently completed production and is awaiting release by the independent animation studio, the Fictory. The first draft of the script was written by Robo co-creater Brian Clevinger. "Robo" is dropped from the Tesladyne cargo plane onto an abandoned Soviet weapons depot in response to an "anomaly." It is none other than Helsingard, one of Atomic Robo's many nemeses, bent on destroying Robo yet again. Helsingard's machine is destroyed after Jenkins destroys its left arm.

Retrieved from "https://atomicrobo.fandom.com/wiki/Atomic_Robo:_Last_Stop?oldid=4391"
Community content is available under CC-BY-SA unless otherwise noted.