Start a Wiki
"The Will to Power" 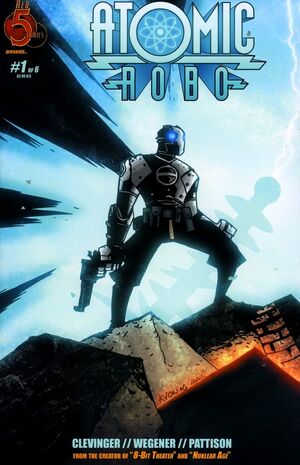 Know what they should call you? Baron von Blabs About His Only Weakness.

Appearing in "The Will to Power"

Synopsis for "The Will to Power"

Atomic Robo, Nikola Tesla's brain child and atomic-powered robot, is offered American citizenship if intervenes in a plot devised by Nazi mastermind Baron von Helsingard. Robo is dropped into Helsingard's secret base in the Himalayas, forcing Helsingard to hastily implant the Vril organ into his own body. Robo proves too much for Helsingard's men and even Helsingard's electromagnetic form. As he dies, Helsingard activates his revenge final protocol, awakening one of his many brain clones.

After the intitial print run sold out, a second print run was given an alternate cover by Scott Wegener.

Retrieved from "https://atomicrobo.fandom.com/wiki/Atomic_Robo_Vol_1_1?oldid=4460"
Community content is available under CC-BY-SA unless otherwise noted.