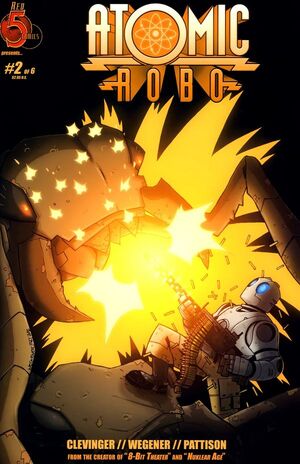 I used my violence on them.

In the present, Atomic Robo is interviewed by a reporter and asked about the hardest part of doing everything that he has done. Flashing back to "three days ago" in Tesladyne Headquarters, Robo is informed of an attack by giant ants (the very existence of which Robo believes is impossible). Five hours later, Robo arrives in Reno and takes on the ants while the Action Scientists comically debate on the validity of the ant's existence. After several hours (and many wrecked cars), Robo finishes off the ants.

Throughout the ant story, Robo flashes back to a fond memory of fellow soldier Charlie Simmons (whom he served with in the Flying Tigers). Before embarking on the ant mission, Robo receives a letter from the granddaughter of Simmons, notifying Robo that Simmons has died of cancer and left him a photograph. The photo is from Robo's memory; it is Robo climbing out of his downed plane after taking Simmons' patrol. Robo writes back to the granddaughter about Simmons' jovial personality and how he will miss him.

Back in the present, Robo responds with a joke about how no one gets his Jack Benny impersonation anymore. Robo is also notified of a moving pyramid and shortly deploys to Egypt.

Retrieved from "https://atomicrobo.fandom.com/wiki/Atomic_Robo_Vol_1_2?oldid=4508"
Community content is available under CC-BY-SA unless otherwise noted.