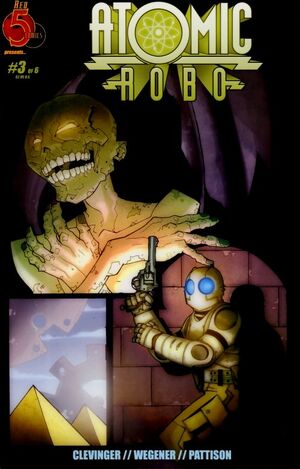 I didn't found this crazy organization to not nuke things.

After battling giant ants in Reno, Atomic Robo and the Action Scientists travel to Egypt to deal with reports of a moving pyramid. The pyramid is on a course to Luxor, and the Action Scientists must find a way to stop the pyramid without destroying it. When the Scientists fly close to the pyramid, it shoots a beam of extremely hot energy, downing their plane. Fortunately, they land safely and use Gladys to get Robo close to the pyramid. Inside, Robo finds mechanical mummies running the pyramid. The pyramid is actually a facade, a supertank disguised as a pyramid with a crystal as the focus for its death ray. Robo shoots the crystal, but the pyramid explodes with Robo in it.

Appearing in "Rocket Science is a Two-Edged Sword"

Retrieved from "https://atomicrobo.fandom.com/wiki/Atomic_Robo_Vol_1_3?oldid=4648"
Community content is available under CC-BY-SA unless otherwise noted.