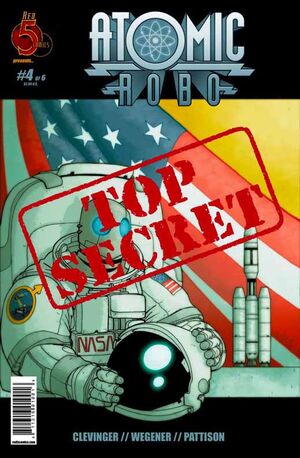 I know it seems like a small thing, but I'm gonna need more than five magazines to entertain myself for a two year round trip.

Appearing in "Atomic Robo of Mars"

Synopsis for "Atomic Robo of Mars"

Immediately following Atomic Robo's neutralization of weaponized pyramids, he is blown into the sky and rendered unconscious. The scene then flashes back to 1974, where Carl Sagan invites Robo is invited to go to Mars on a top secret mission. On the third day of flight, Robo and the team at NASA discovered that Robo had run out of reading material and would be extremely bored for the duration of the flight to Mars. NASA is confused, as a (false) psychiatric evaluation of Robo conducted by Stephen Hawking had said that Robo had a power down state, which he did not. Three hundred days later, Robo landed on Mars and began to conduct "tests" with rocks, some even unsanctioned by NASA. As Robo prepares to leave, with a series of radio programs ready for the return trip, his view from space reveals that he has formed the sentence "Stephen Hawking is a bastard" in rocks on the surface of Mars.

At the end of the flashback, Robo awakens to the Action Scientists' relief. On the radio, the Egyptian president berates him for destroying the (mechanized and dangerous) pyramids, insisting that he must be punished for it. The president refuses Robo's offer to have this service and the next free. However, a giant mummy-like being emerges from the sand, prompting the president to reconsider.

Appearing in "Atomic Robo vs. Rasputin"

Retrieved from "https://atomicrobo.fandom.com/wiki/Atomic_Robo_Vol_1_4?oldid=4530"
Community content is available under CC-BY-SA unless otherwise noted.