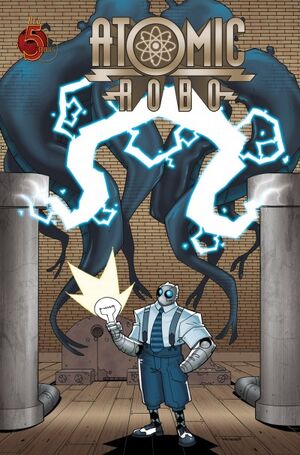 Appearing in "Horror on Houston Street"

Synopsis for "Horror on Houston Street"

In New York City on April 3, 1926, Robo hears a knock on the door as he is studying. A distraught H.P. Lovecraft and Charles Fort request the help of Nikola Tesla, who is away on a speaking tour. Fort explains that Lovecraft has been infected with an entity that Fort, Tesla and Lovecraft fought in 1908, near the Tungeska River. Lovecraft's form is mutated by entity, who then escapes the building. Robo follows him.

Appearing in "Once Upon a Time in Mexico"

Retrieved from "https://atomicrobo.fandom.com/wiki/Atomic_Robo_Vol_3_1?oldid=4589"
Community content is available under CC-BY-SA unless otherwise noted.