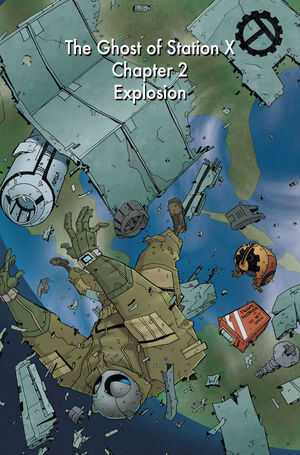 We were tricked. Simple as that.

After Atomic Robo accidentally impacts a satellite run by the United States Pentagon, the Action Scientists take immediate action by trying to catch Robo with their plane. Robo is severely damaged while reentering the atmosphere and falls unconscious while the Action Scientists attempt to repair him and prevent a nuclear detonation from the power source in his body. Twenty-seven hours later, Robo is revived and, after a stern talking-to by his team, contacts Director Bolden to ask about the astronauts. Bolden reveals that he did not call Robo and that the astronauts were completely fine from the start. They both promise to investigate the breach. Robo (after hopping into some pants) stops off to try and get his Webley Mark VI fixed (given to him by Jack Tarot 80 years ago) before warning his team that they are under attack.

Meanwhile, in Bletchley Park, Sparrow, Martin, and Louis continue their investgation into "Station X" (which Sparrow finds means "Station Ten", the name of Bletchley Park during World War Two). Modern fiber cable is mixed into old copper telegraph wire, leading Martin and Louis to conclude that at least one or two supercomputers were secretly in the building.

Retrieved from "https://atomicrobo.fandom.com/wiki/Atomic_Robo_Vol_6_2?oldid=4645"
Community content is available under CC-BY-SA unless otherwise noted.