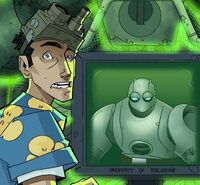 Clevinger's webcomic is 8-Bit Theater, hosted on his site Nuklear Power. The comic is very loosely based on the video game Final Fantasy I and tells the story of four would-be fantasy heroes, known as Black Mage, Fighter, Thief, and Red Mage, along with the two "stalking" heroes White Mage and Black Belt, who set out to save the world from the embodiment of Chaos, but trip over their own stupidity in the process. The comic is done using 8-bit quality graphic sprites taken primarily from the Final Fantasy game or created by either Clevinger himself or Kevin Sigmund.

He has also created two mini-comics: Dynasty Memory was created in 2002 as a parody of the Dynasty Warriors series, and Field of Battle was created in August 2005 as a parody of First Person Shooter games in general, Battlefield 2 in particular, and as a tribute to a reader deployed to Iraq at the time.

The self-published novel Nuklear Age is largely an extended parody of comic books. The book recounts the adventures of Nuklear Man and his sidekick, Atomik Lad, as they fight against rogue military weapons, highly evolved civilizations, the trials of everyday life, an angst-filled over-villain of undeniable power, the ever exotic Dr. Menace, and their own impulses.

Atomic Robo released its first issue in October 2007. Created by Clevinger and artist Scott Wegener and published by Red 5 Comics, Atomic Robo is a series of mini-series about a robot created in 1923 by Nikola Tesla and his adventures throughout history.

Retrieved from "https://atomicrobo.fandom.com/wiki/Brian_Clevinger?oldid=4480"
Community content is available under CC-BY-SA unless otherwise noted.