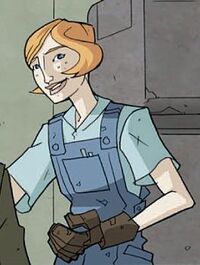 The daughter of the vigilante Jack Tarot, Helen McAllister assisted him as his first and (until Atomic Robo) only partner in crime fighting. In 1930, her father met Atomic Robo on the streets of Chicago while crime fighting, unwittingly leading Robo to the McAllister household. Helen managed to convince her father to take Robo on as a protege, and together (with the assistance of Nikola Tesla) they helped stop a plot conceived by Thomas Edison. McAllister seemed to take a liking to Atomic Robo, and it is implied that they were involved romantically.

In 1937, McAllister and Chen Zhen raided a warehouse in Sihang, Shanghai[1]. In 1938, McAllister was reunited with Atomic Robo, who was on a mission to apprehend scientist Lu Huang. McAllister had went to visit Tibet for "zen marksmanship" when the Japanese invaded, stranding her in China. She came into contact with Chen Zhen, the leader of the resistance and Atomic Robo's contact in Shanghai. When the base is raided, McAllister and Robo escape, but are captured in Manchukuo by Lieutenant Matsuda Ichiro.

McAllister is confirmed to have died by the present time, most likely due to old age.[2]

In her appearance in Atomic Robo Vol 11, the scar on the right side of her face is sometimes present, but sometimes disappears.

Retrieved from "https://atomicrobo.fandom.com/wiki/Helen_McAllister?oldid=4612"
Community content is available under CC-BY-SA unless otherwise noted.