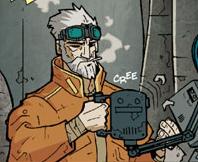 Ivan Koshchey was a Russian scientist who was hidden away in a Siberian island by Joseph Stalin prior to World War II. Koshchey invented nuclear weapons a decade before the rest of the world, but his discoveries were deemed useless by the industrial-minded public. Stalin was the only person aware of this potential, so he erased Koshchey from all public records and installed other scientists as a front for his research.

In 1961 he developed a bomb that would destroy all life on Earth in revenge for the recognition he believed he deserved. Atomic Robo stopped his plans and Koshchey died in the wreckage of his lab. Robo never revealed Koshchey's identity to the world, in spite of the scientist's plea for him to do so.

One of the robots Koshchey built to guard his lab would later survive the lab's destruction and travel to Cherepovetz City, A.K.A. the City of Skulls. By 1992, Robo is notified by Yuri that the radiation stored in the robot's body has decimated the city. Robo destroys the docile machine, which seems unaware of its effects.

Retrieved from "https://atomicrobo.fandom.com/wiki/Ivan_Koshchey?oldid=4556"
Community content is available under CC-BY-SA unless otherwise noted.