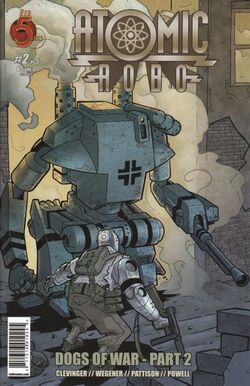 Designed by Baron von Helsingard and constructed as part of the Nazi secret weapons program, the Laufpanzers (roughly translated as "Walking Tanks") were a decidedly powerful weapon in the German arsenal. Despite their incredible effectiveness (A half-dozen halted an entire Russian battalion) they were never mass produced, with Hitler only ordering twelve to be built. These dozen Laufpanzers were organized into a single combat force placed under the command of Otto Skorzeny. While initially stationed on the eastern front, the unit was rushed to Sicily in anticipation of the allied invasion there. The US Army, well aware of the Laufpanzers' capability, deployed Atomic Robo behind enemy lines during the early hours of the invasion to destroy them before they could threaten the allied advance. However, Skorzeny was able to mobilize his forces faster than anticipated, and Robo was forced to engage most of them on the front lines. Over the course of the first day, Robo and a group of soldiers who rallied to him destroyed five of the Laufpanzers before the rest were recalled. Robo was then given command of the soldiers who fought with him, and tasked to hunt down Skorzeny and the remaining Laufpanzers. The Laufpanzers were seen for the last time in August of 1934, when the only two units still operational were destroyed in the self destruct of Vanadis Valkyrie's laboratory in Croatia.