Like Robo, the Lightning Gun was invented by Tesla in the early 20th century. Exactly when it was developed is currently unknown, but the earliest sighting was one used in June, 1924, by a young Atomic Robo to defeat Rasputin. How it functions is mostly a mystery, but Robo says it works by "collect[ing] electric charges from the air and boost[ing] them to obscenely dangerous levels through an even more dangerous process." The Lightning Gun has appeared throughout Robo's life in numerous incarnations (see Development), and has been used by the forces of both good and evil.

Because no Lightning Gun model to date has ever been given any specific designation, we will refer to them by the issue in which they are first used. The code goes: volume, issue, story (for story, a will indicate main story and b will indicate backup story). Images currently pending.

Earliest Appearance: June, 1924
Design: Appears capable of both one-handed and two-handed use. The gun itself plugs into a large device mounted on the user's back, which in turn is plugged into three large generators. Due to the incredible mass of its power source, the gun has very low portability. For what it lacks in mobility, it more than makes up for with its obscenely heavy firepower.
Use History: Atomic Robo vaporizes Rasputin, as well as an entire wall of the Houston Street Laboratory.
Other: This is the oldest known Lightning Gun model to date. 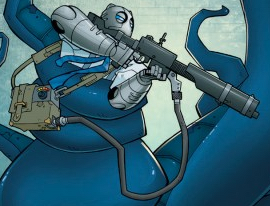 Earliest Appearance: April 3, 1926
Design: The gun's body resembles a Maxim Gun, and requires two-handed use. The gun is connected by cable to a box roughly the size of a small suitcase, which is worn with a shoulder strap. The output can be changed by a dial on the box, which has settings labeled one through nine.
Use History: Atomic Robo puts a pair of guns on setting nine and drives into the mouth of the Shadow from Beyond Time, causing a massive discharge of electricity. Shortly thereafter (relative to him) in the Exoverse, three future versions of himself use the burnt out powerpacks from the guns to construct a hyper-dimensional bomb.

Other: Atomic Robo warns Charles Fort not to set the dial past five, but then revises this to "..set it to one and then forget it's there."

Earliest Appearance: 1938
Design: Two-handed use.
Use History: Atomic Robo brings it with him to the Himalayas on his mission to arrest Baron von Helsingard. His uses it to kill Helsingard by shooting the Vril organ inside of him.
Other: None

Earliest Appearance: August, 1943
Design: Two-handed use.
Use History: Otto Skorzeny shoots Atomic Robo with it in Vanadis Valkyrie's laboratory.
Other: This model of Lightning Gun was built by the Nazis using the designs Otto Skorzeny stole from Tesla.

Earliest Appearance: October, 1944
Design: This model vaguely resembles a handgun, and is designed for one-handed use.
Use History: Otto Skorzeny shoots Atomic Robo with it on Guernsey Island.
Other: This model of Lightning Gun was built by the Nazis using the designs Otto Skorzeny stole from Tesla.

Earliest Appearance: October, 1961
Design: The gun has a handgun body, but plugs into a belt-mounted pack. It is built for one-handed use.
Use History: On his mission to stop the use of an atmosphere destroying bomb, Atomic Robo uses this model to destroy at least four Combots before gunfire severs the connecting cable.
Other: None

Earliest Appearance: 1971
Design: Two Handed use with a dial of unknown function.
Use History: After spending roughly ten minutes heavily modifying it, Carl Sagan uses this model to restructure the Shadow From Beyond Time's anatomy from an insect swarm into a single being by shooting it.
Other: None

Earliest Appearance: 2005
Design: Two-handed use. It can also function as a conventional firearm, and uses highly explosive shells.
Use History: In Tesladyne's confrontation with Baron von Helsingard and his cyborg army in the Italian countryside, Koa uses this model of Lightning Gun in the firefight.
Other: None

Earliest Appearance: 2005
Design: Two-handed use. Possibly has a built-in scope.
Use History: In Tesladyne's confrontation with Baron von Helsingard and his cyborg army in the Italian countryside, Ada uses this model of Lightning Gun in the firefight.
Other: Helsingard reveals that he had developed "a brilliant defense against [Lightning Guns]" when Ada shoots him with one but fails to leave a mark.

Retrieved from "https://atomicrobo.fandom.com/wiki/Lightning_Gun?oldid=4389"
Community content is available under CC-BY-SA unless otherwise noted.