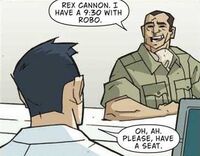 Rex Cannon was a former Marine and Navy SEAL with three PhDs, including one in an unnamed field dubbed "Meta_____". Cannon is interviewed by Atomic Robo along with Bernard Fischer as an Action Scientist candidate. He was believed to have been killed by Vampire Dimension "Vampires" almost immediately after he is introduced. However, he has subsequently been revealed to have become the king of the vampire dimension[1]