Start a Wiki
Shadow From Beyond Time 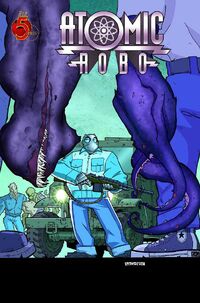 The entity known as The Shadow from Beyond Time is a Cthulhu like being which exists outside of time and space. It intersects with our universe at multiple points in time and space simultaneously, and, if left unchecked, will expand and eventually consumes the whole universe across the entire space-time continuum until nothing but it ever existed. After Robo stopped it in 1926, it has held something of a grudge against him, and in a convoluted paradox of causality the pair of them are stalking each other through time. It has also demonstrated rudimentary speech (though its vocabulary is somewhat limited) and moderately intelligent behavior, as it learned from past encounters with Robo and develops new plans to deal with him accordingly.

Because it does not obey the laws of our universe, it can restructure its anatomy at will, and has assumed a number of different forms in its encounters with Atomic Robo.

Many of the Shadow's appearances are marked by readings of "Infinity minus one" on detection equipment.

Retrieved from "https://atomicrobo.fandom.com/wiki/Shadow_From_Beyond_Time?oldid=4592"
Community content is available under CC-BY-SA unless otherwise noted.