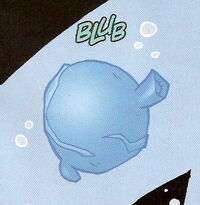 The Vril organ could allegedly make a person's will become reality. As part of Germany's special weapons projects, Baron Heinrich von Helsingard had the organ implanted in himself. He seemed to become a being of pure energy before the organ was apparently destroyed by Atomic Robo.

While Helsingard is having the Vril organ implanted, he says that in the process of creating or obtaining the it, he brought "ruin to an underground utopia pre-dating the dawn of agriculture". During the events of The Savage Sword of Doctor Dinosaur and The Knights of the Golden Circle, it is revealed that this "underground utopia" is Hollow Earth, and the power of Vril is the same as that of Dr. Dinosaur's crystals.

"Vril" is a reference to the novel Vril, the Power of the Coming Race, in which an underground race called the Vril-Ya are capable of using godlike power with the help of a substance called Vril—a metaphor for mankind's new power over electricity. This novel was taken to be a factual text by several groups, including, reportedly, one funded by the Nazi government.

Retrieved from "https://atomicrobo.fandom.com/wiki/Vril_organ?oldid=4641"
Community content is available under CC-BY-SA unless otherwise noted.